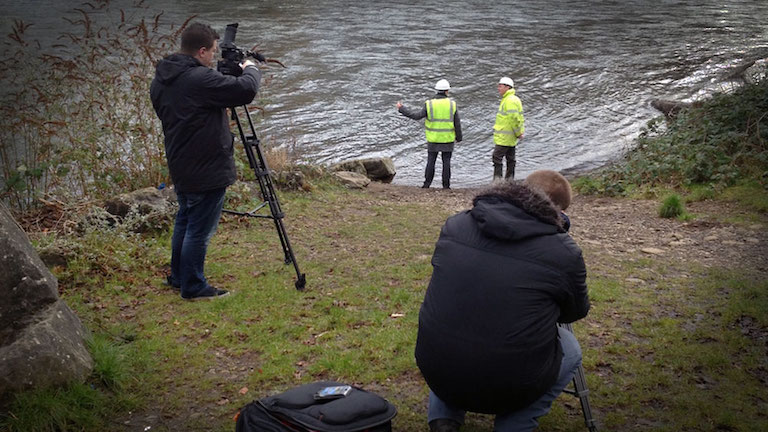 On every Like an Egg promotional video we tend to use a minimum of two cameras, it’s a simple rule that we always like to adhere to. A lot of other crews out there prefer to shoot with a main camera and a B-camera to cover all their bases, and we’ve also found this as the best formula for us. There are a number of reasons for the use of multiple cameras and we’ll explain them in this article.

Firstly the downside of using more cameras means more camera operators, and inevitably more cost. There are understandably many who would rather keep costs down and we could hardly blame them. We have occasionally had to manage with just one camera operator whenever the budget demands it. However as you can see on our costing page, we would always suggest at least two cameras for all the reasons mentioned here.

To put it simply, using two or more cameras allows a film crew to capture more footage in a given length of time, which means more options during the edit. More cameras allow the crew to cover more ground, get a greater variety of shots. But more importantly it can reduce the risk of missing those interesting or important one-off moments. If only one camera is used, it’s so easy to miss things that could have been caught by another angle, especially if timing is a factor.

In interview situations, using a second or even third camera is a no-brainer. Firstly because more angles allows the editor to create a seamless interview without any jarring cuts. So any of those unnecessary sentences, pauses, or coughing fits can be cut out, leaving only the good and necessary answers in the video. Having other angles to cut to also helps keep interviews visually interesting and maintain the momentum of the rest of the video. Without a second angle it would be tricky to make cuts in the interview go unnoticed.

Finally and perhaps more importantly, capturing another angle is a valuable failsafe if and when a camera decides to pack in. We don’t like to admit it, but pretty much everyone in our line of work has stories of a camera overheating, a memory card becoming corrupted or flat-out operator error. These can lead to some or all of the footage being lost on that memory card. Thankfully these moments are rare but they can still happen, and by Sod’s Law at the worst possible time! Sometimes it can be impossible to replicate that perfect moment or interview with the same initial impact. So using a second camera as a backup means if something does fail, not all is lost, as a secondary camera will still have plenty of usable footage on it.

More cameras allow for more variety, more options in the edit and peace of mind.